More than a century ago, ABB took up the challenge of opening more routes through the Alps. To accomplish this ambitious goal, the company had to unite top technological performance with the highest standards of sustainability. And it did just that, creating a legacy of impressive expertise and success in the Alps’ mountain railways.

The UN created the International Mountain Day to raise awareness that mountain regions and their residents are confronted by climate change. The newly launched ABB website provides in-depth information about how the company provides sustainable routes into the Alps, central Europe’s highest mountain range and home to roughly 14 million people.

Featuring a virtual journey, website visitors can get a comprehensive idea of ABB’s technology and its vital contribution in making mountain tourism a green experience, sustainably crossing the highest Alpine pass, taking tourists to the Jungfraujoch, the so-called top of Europe, in an environmentally friendly way, and writing history as an Alpine electromobility pioneer.
Jungfraujoch
Once they reach the slopes, skiing enthusiasts can enjoy with state-of-the-art Atomic skis, made by ABB robots working together with human experts. In Madrisa, Switzerland, the chairlift to the Schaffürggli peak features an automatic size recognition system with a height-adjustable conveyor belt, when passengers board the chairlift. This enables small children and people with disabilities on monoskis to be lifted to the ideal seat height.

On the interactive map, visitors can gain more information about mountain regions in the Swiss, Austrian and German Alps, such as for example Stoos in Switzerland, where ABB’s high-performance motors power the world’s steepest funicular rail line, enabling 1,500 people to make the trip each hour, double of its previous capacity at twice the speed. Just a few days after the Stoosbahn opened for business, the next record-breaking Alpine project began operations in the German state of Bavaria. 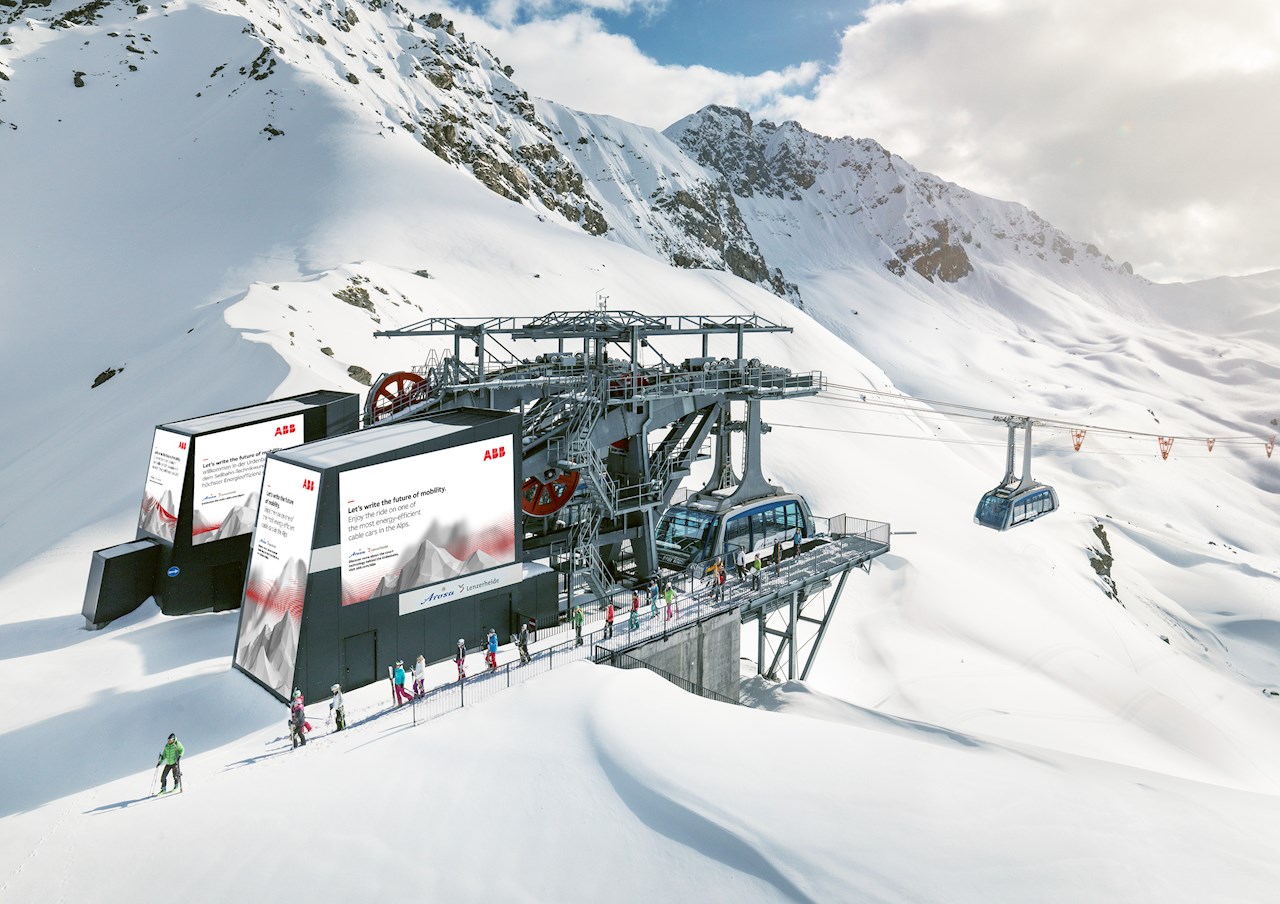 Another ABB solution in the mountains can be found in Lenzerheide, Switzerland
The new Zugspitze aerial tramway set three world records at once. Its only steel support is the world’s highest at 127 meters. Moreover, the aerial tramway successfully copes with the largest ever total height difference of 1,950 meters, while also bridging the world’s longest free cable span at 3,213 meters. ABB also provided key electrical components for the power supply and ventilation system of the 57-km railway that cuts through the Saint Gotthard Massif, one of the most important alpine passes in Europe, connecting the south and north of the continent.

The site also has more information about ABB’s contribution to the region’s electromobility infrastructure. For instance, visitors to the World Economic Forum WEF this year were able to travel the entire route from Zurich Airport to Davos using sustainable transport, thanks to ABB’s fast-charging stations.

ABB (ABBN: SIX Swiss Ex) is a technology leader that is driving the digital transformation of industries. With a history of innovation spanning more than 130 years, ABB has four customer-​focused, globally leading businesses: Electrification, Industrial Automation, Motion, and Robotics & Discrete Automation, supported by the ABB Ability™ digital platform. ABB’s Power Grids business will be divested to Hitachi in 2020. ABB operates in more than 100 countries with about 147,000 employees. www.abb.com.

Unitec-D is a company based in Germany that helps you to optimizing purchasing, procurement, logistics resulting in a reduction in the number of suppliers and management and administrative costs. In short, Unitec will simplify your life.

Any cookies that may not be particularly necessary for the website to function and is used specifically to collect user personal data via analytics, ads, other embedded contents are termed as non-necessary cookies. It is mandatory to procure user consent prior to running these cookies on your website.

Your cart is empty.